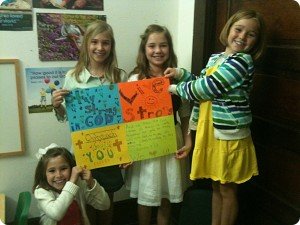 One of the blessings I have is that of teaching a Bible Class each quarter at my church in Hamilton, Texas. Recently we were talking about prayers, compassion, and service. I shared with the youngsters in my class that a few years ago I had come into contact with a precious family from Sendai, Japan. The siblings of this family all spent a year in the United States some attending high school in our rural central Texas community. We had the privilege of having two of the siblings stay in our home for a short period of time. I received correspondence from one of our precious sisters in Christ from Sendai following the massive earthquake and devastating Tsunami. The children had heard of and seen videos of the hardship of many of the Japanese population and wanted me to share the email in class.

Hello.
Thank you for your worry and prayers on the result of the earthquake. I wished to tell you about us and our life but I couldn’t because of the busy days just to live on. I’m glad God has given us enough things for our daily life.

I was at my home in Rifu city which is next to Sendai city. The earthquake was so strong, I’ve never experienced such. I was afraid of the house collapse so I got outside with one month old son, Yuki. The road was waving and houses were shaking hard. No one could stand still but sat down.  At last, it stopped. I was glad to know my house was alright.  When I got back inside, I found out that everything was out of own places, book shelves fell down and dishes were broken and scattered on the floor.

I drove to the nursery to pick up my other two sons, Yoshiki (3 years old) and Aiki (1 year old). I felt several severe aftershocks. Some stone walls fell down. The road had cracks and difference in level here and there.

Electricity and gas supply stopped.  We cooked using a portable gas cooker, lighted by candle.  We couldn’t have any heaters lit so we wore coats inside of the house.

My husband’s normal commuting time is about one hour.  Believe or not, he took five hours to back home on that day.  We worried about him until we could make a contact with him which was several hours after the earthquake.

At that night, we slept on the first floor instead of the second floor where we usually sleep, so that we can evacuate anytime. We brought the beddings down, put the outside shoes aside and kept the clothes on.

On the next day, the water supply stopped.  People made a line to a brook on the mountainside near my house.  It took three hours to get some water.  Now, the water line at some areas have recovered and other areas get water delivery by a tank car.  My area will get tap water on 3rd April, until then we have to keep making line for water.  Without water, we haven’t had bath nor shower last ten days since 11th March. We can’t wash clothes.  We can’t flush toilet well.

Three days ago, some stores opened.  Again, we had to make lines for several hours and we had no choice but get bags with some food already packed.

As you may be informed by TV or newspaper, we have serious shortage of gasoline.  Five days ago, we had to wait nine hours on a line to get 20 liters gasoline.  A few days after then, there was nothing left at all. But many cars were still on the line even though no one knew when another gasoline arrives.

They decided to close the nursery until 30th March due to no water and gas supply.  My two bigger boys can’t bear just staying in house all day long with many aftershocks.  So, there’s no other way to make them calm but letting them play outside.  Honestly, we don’t want them to be out long at this moment as we are not sure about radioactivity level.

There’s no damage on our church building.  My parents and Akira are fine, without any injury.  Parents’ house has many things on the floor.  Akira and Mitsuyo have been running a restaurant for past two years in the center of Sendai city and Paul is helping them. Many glasses were broken in the restaurant. In spite of that, they try to cook some warm food and distribute to the needed people on the shelter.

We have things necessary to live.  The people really in trouble are in the seaside area.  By Tsunami, a lot of people lost their family and or houses.  So many areas are out of order.  Even schools can’t work properly.  Some schools can’t use the building itself well.  In Japan, school year starts from April.  But some schools have to run entrance examination after April.

Please pray for everyone to have hope even though there is so much difficulty.  I think public system must be recovered before long.  I’d like you to pray for the workers and if you have a will to do, please find a way to support the recovery work.

As I read the email to my bible class, it was very obvious that the children were filled with empathy and concern. I suggested that we send a message to my friend Yuko in the form of a picture so that she could see their faces. The children were thrilled with the idea of sharing their heartfelt sentiments from so very far away and eagerly worked on their special message to Yuko.

A message from Japan soon returned titled Thank you for your Prayers stating the following:

I was so glad to have the Message from children at Outreach Church of Christ. Please say hello and thank you to them.

Isaiah 35:3-4 says: Encourage the exhausted and strengthen the feeble. Say to those with anxious heart, “Take courage, fear not”

It is so important to let our children know that small kindnesses can have a large impact. I think the message of love of gratitude received from Japan was confirmation of this truth.