Whatever you do, work at it with all your heart, as working for the Lord, not for men.
Colossians 3:23  (NIV84)

Watching through the eyes of a young girl around the age of thirteen, I noticed the furrowed brows and heard concern in my daddy’s voice as he spoke with a representative from the horticulture department of Texas A & M University. Calling the university was not unheard of, but it was not done unless Daddy had a serious problem and needed some guidance from individuals who had researched and could offer suggestions. Long distance phone calls were expensive in those days, and they were not made on a whim.

In all of his years as a farmer, my daddy (Pop) had never experienced the problem of aphids covering the entire 200 acres of small watermelon plants and threatening a devastating loss at that stage in the season. Having to replant the whole field would cost precious time and money, plus make the harvest late. This could lead to a complete crop failure with no income for the entire year and much money lost in the process.

As I listened and watched, I noticed how attuned Pop was to the advice he was receiving. He made a few notes, asked several questions, and when he felt comfortable with the answers, he hung up the phone.

After his phone call, Pop discussed the advice he had been given with my mother while I was in the room. I was amazed. Daddy was told to order ladybugs — enough ladybugs to fill an entire 18-wheeler trailer! The theory was that the ladybugs would eat the aphids before they could destroy the small watermelon plants. After much discussion, consideration, and planning, Pop ordered the ladybugs. This was exciting news to me!

When the big day arrived, I was allowed to be there and watch the release of the insects. The 18-wheeler was parked at the edge of the watermelon rows, and when the doors were opened, we saw that the trailer was packed to capacity with hundreds of boxes, each one filled with thousands of ladybugs waiting to be set free!

Daddy let me help, and as we opened the boxes, ladybugs flew in every direction. The immediate area was swarming with the small bugs and many of them flew straight to me. My whole shirt and most of my blue jeans were dripping with ladybugs. As they began to drift away on the mission they had been purchased to accomplish, it was fascinating to witness them clouding the sky right above our heads, with the picturesque sunlit sky in the backdrop. 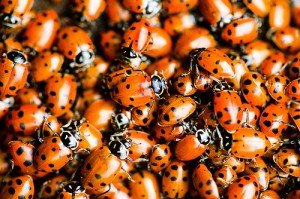 That night Pop prayed that the ladybugs would find the aphids and have a feast. And they did. Within 24 hours, they had eaten all the aphids and saved the whole watermelon crop.

There were people who thought my daddy took a big risk because the ladybugs were costly. But I saw something different. Pop was a man of faith, and he believed that God’s plan with the natural food chain was more promising and safer than using chemicals to rid the plants of the aphids. I thanked God for saving the crop and for my daddy’s trust in Him — an example to always remember.

Heavenly Father, thank you, thank you, for my earthly father who taught me so much about faith and trust in you. I know that I was blessed beyond measure to have such a wonderful example from the man whom we so lovingly called “Pop.” His wisdom and Godly example live on in the stories of a life well-lived by a man who worked hard and cared deeply for God, his family, and other people. In Jesus’ name, Amen

Now faith is being sure of what we hope for and certain of what we do not see.
Hebrews 11:1  (NIV84)

Be patient, then brothers, until the Lord’s coming. See how the farmer waits for the land to yield its valuable crop and how patient he is for the autumn and springs rains.
James 5:7 (NIV84)