A special request to our readers and prayer warriors:

The Breath of Life team is asking for prayers for someone very special to us. Dennis Ensor, who is our dear friend, a great supporter of Breath of Life Women’s Ministries, and one of our guest writers has a brain tumor and is scheduled for surgery on February 11th. Please join us in praying for Dennis. As Dennis said, “We are asking for, and believing in, a miracle here.”

In honor of Dennis, our beloved brother in Christ, we will be running a series of his previous inspirations posted on our web page.

Thank you in advance for your prayers—we appreciate them and each one of you very much!

A reposted article
by Dennis Ensor 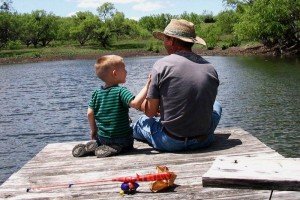 I recently had the pleasure of spending a few days with my sweet grandson, Trapper. We did a lot of the usual things. We went to the tank (pond) and caught little fish, down below the dam, with our nets and transferred them into the tank. We skipped rocks on and swam in the crystal clear water. We shot the BB gun and rode his dad’s four-wheeler. (I loved to see and feel his little arms and hands next to mine on the handlebars as we navigated through the pasture.) Except for a few ant bites, mosquito bites and some stinging nettle it was pretty awesome.

We also played all the usual games in the house. And, as we always do, we looked at all the knives in my knife collection. He asked me if he could have a knife so I took one of the small pocket knives and wrote on the back of it with a sharpie pen “To Trapper, From Pa, 9/1/07.” It is now stored with my other knives for his future use when he gets a little older.

As usual he spotted the rocks that I have on a shelf in my office. We talk about them every time he comes—about why I have them and where they came from and the fact that they are “special.” I’ve got a few rocks that I brought back from Colorado on youth back-packing trips. I’ve got a couple that we picked up on trips to foreign countries. I’ve even got a couple of concrete chunks that came from the Berlin Wall. 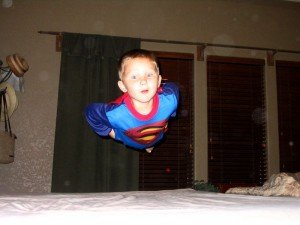 But the favorite rock I have (his and mine) is a white marble rock which came from the same region (and possibly the same quarry) where Michelangelo got his marble to do the statue “David” (which is my favorite art piece of all time. It just blew me away when I saw it in Florence).

Trapper asked me if he could have it and I said he couldn’t take it right now but that I would let him have it someday. I picked it up and wrote on the bottom of it with a black sharpie the story about the rock and that I was going to give it to Trapper and that I loved him.

Later, when Trapper’s dad, Jarod, came to pick him up, I let him take the rock downstairs to show his dad. As he came back up the stairs I met him as I was going down. He paused and teared up a little and asked me, “Why can’t I have it now, Pa?”

A couple of weeks earlier I had listened to a speaker talking about possessions. He made the point that we only use about 20% of the clothes in our closet but that it’s just not hardly in us to get rid of the 80%. And we are kind of like that with all of our possessions. We really cling to them. He said that not only was it good for us to live with less, but that it was so healthy for us to give away something that was valuable to us. It is good to give away something that is a favorite of ours. 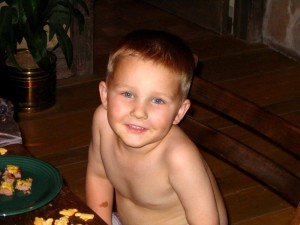 As Trapper had kept asking me to give him that rock and as I saw him standing there on the stairs so innocently with his eyes welling up with tears I thought about how much I love him. And I thought about how good it is to give away something that is precious. So I gave him the rock. I told him he could take it home.

Relief and joy and excitement swept across his face. I scooped him up in my arms and carried him into the den where he joyfully told his dad that “Pa” said he could keep the rock. And then we went outside to look for a few more “special” rocks that were small enough to fit into his pocket.

After Trapper and his dad made the drive home, Jarod wrote me to say the following: ​

“Dad,
Trapper held that rock all the way to Lubbock (4 hour drive). When he fell asleep in the truck I took it out of his lap so it wouldn’t fall and hurt his toe. In the middle of his nap he turned over ​to change positions and without saying a word ​(he barely opened his eyes) he reached down and picked it up, placed it back in his lap and fell asleep. Thanks for being such a great dad and ‘Pa.’ Love, Jarod”

I don’t know if I’ll ever see that rock again. I hope so. It truly is special to me (now more than ever). I hope that it somehow makes it through his childhood and stays in his possession. It will now be associated with two great memories and it will be a reminder of how much I love him and how much I treasure his love.

Dennis Ensor is the author of three books: Texas Pioneer Chronicles: The Life and Times of the Ensor, Kelso and Crim Families Since 1856, The Good News From God: A Fresh Perspective on The Bible, Christianity, Church and Life (which can be downloaded, free of charge from the Breath of Life website), and his newest offering, Taking Another Look at New Testament Christianity (which he recommends to all his Christian friends. Go to tal.dennisensor.com for a free preview of the book.) These are available at any time from Amazon.com.