The only thing that counts is faith expressing itself through love.
Galatians 5:6b (NIV) 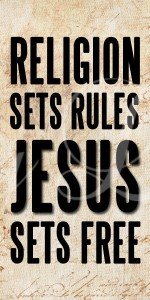 Most of my life I have been a part of a church fellowship that focused a lot on the keeping of religious rules, and on condemning others who failed to keep those rules to the same standards that I kept them. I now know that I was wrong to do that.

A verse that sums up my attitude at the time is found in Galatians 5:6, where Paul talks about how some in the brotherhood in the first century would fail to accept anyone as a brother unless he had been circumcised prior to becoming a Christian.

Though none of the churches I grew up in required anyone to be circumcised, they did require that everyone believe and follow certain rules about “worship.”

I now see the folly of those rules and the folly of requiring others to follow those rules before accepting someone as a brother. In a word, I was wrong to do that. But, thanks be to God, I now see that these little rules that I put so much emphasis on were nothing but rules made by man. And I now see what is plainly stated in Galatians 5:6, that the “only thing that counts is faith expressing itself through love.”

I’ve written extensively about this in my recently completed book called “Taking Another Look at New Testament Christianity.” If you have been condemned by a rule-keeping body of believers, this book will give you answers to the condemnations you have been receiving, and it will confound those condemners—hopefully causing them to rethink their positions.

Most of them have been in an echo chamber for so long that what they were condemning you for made sense to them, not because it was right, but because so many others were going along with their thought processes. This book will stop them in their tracks. For their sake and yours, order your copy today.

And never forget the fact of the day: “THE ONLY THING THAT COUNTS IS FAITH EXPRESSING ITSELF THROUGH LOVE.” Live by this fact and you will experience the abundant joy that comes to believers in the Word.

May God bless you abundantly as you seek his will.

Copyright © 2015, Dennis Ensor, all rights reserved. You may contact Dennis at dennisensor@hotmail.com. Dennis Ensor is the author of three books: Texas Pioneer Chronicles: The Life and Times of the Ensor, Kelso and Crim Families Since 1856, The Good News From God: A Fresh Perspective on The Bible, Christianity, Church and Life (which can be downloaded, free of charge from the Breath of Life website), and his newest offering, Taking Another Look at New Testament Christianity (which he recommends to all his Christian friends. Go to tal.dennisensor.com for a free preview of the book.) These are available at any time from Amazon.com.